This week there is an international food market in the centre. There are stalls with food from different countries, mainly European but one stall wit Thailand and one with Australian food as well. Yesterday I bought some fudge candies from Britainâ€™s stall and a gyros from Greekâ€™s. It was really good eating it (gyros) after so many years. Last time I ate it was on Ios, 5 years ago. (Oh and the candy, I ate it yesterday despite planning on eating it throughout whole week). The food at the stalls is good, although some (especially Spanish) students keep saying that food (Spanish) is nothing like the food in Spain. They even said that theyâ€™ll cook us some real Spanish food, so Iâ€™m looking forward to that.
Today I went to the food market again and had an Australian crocodile burger, some friends had a kangaroo burger and we all agree it tastes really similar as a normal (beef) burger. I would love to try some more food but the prices are sky high. 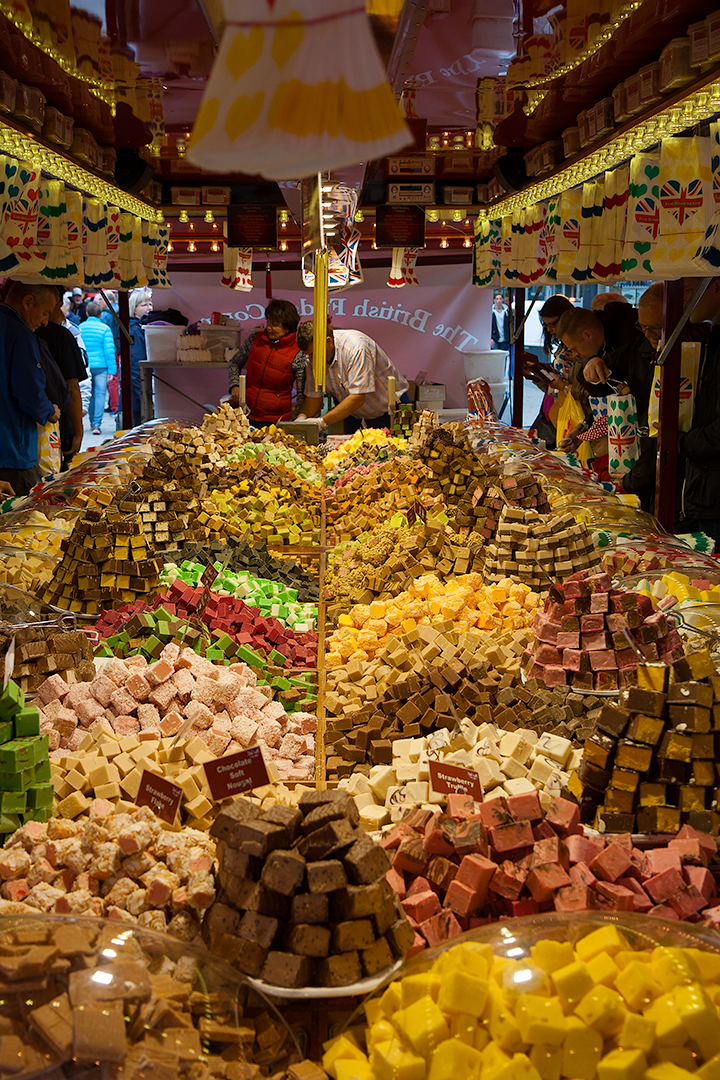 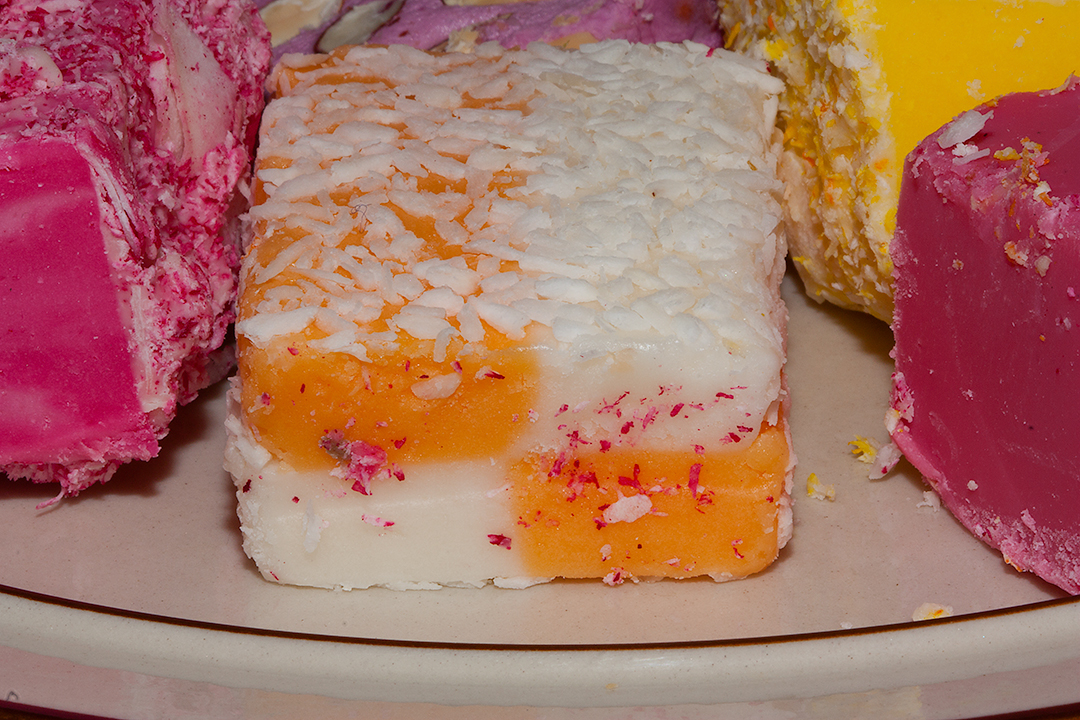 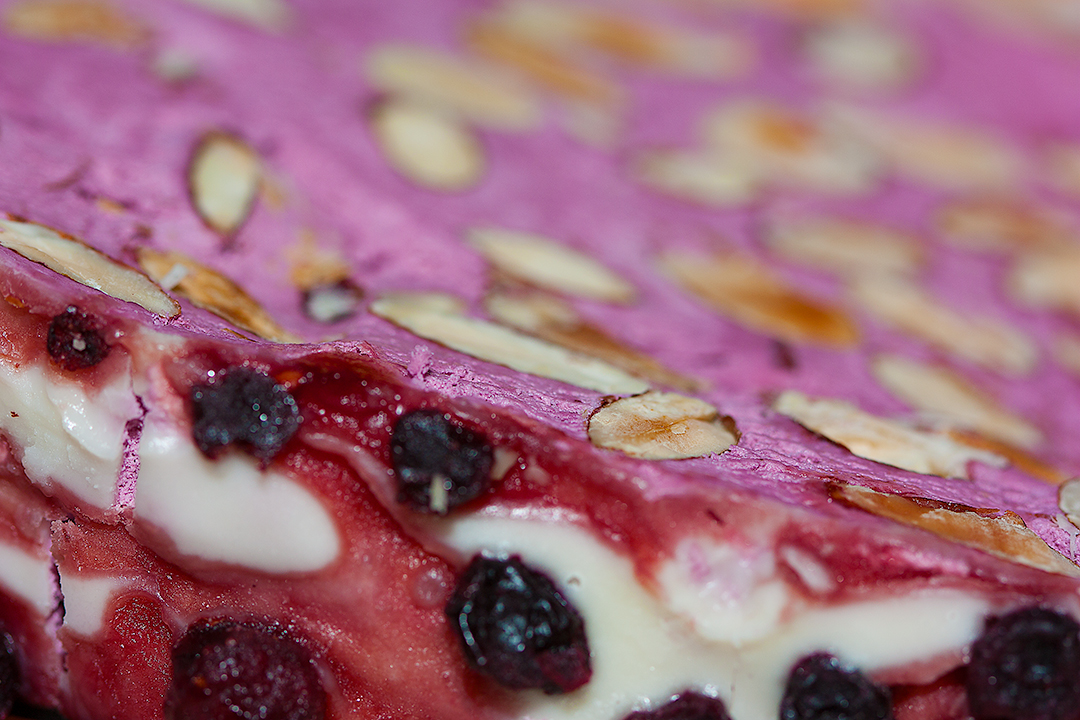 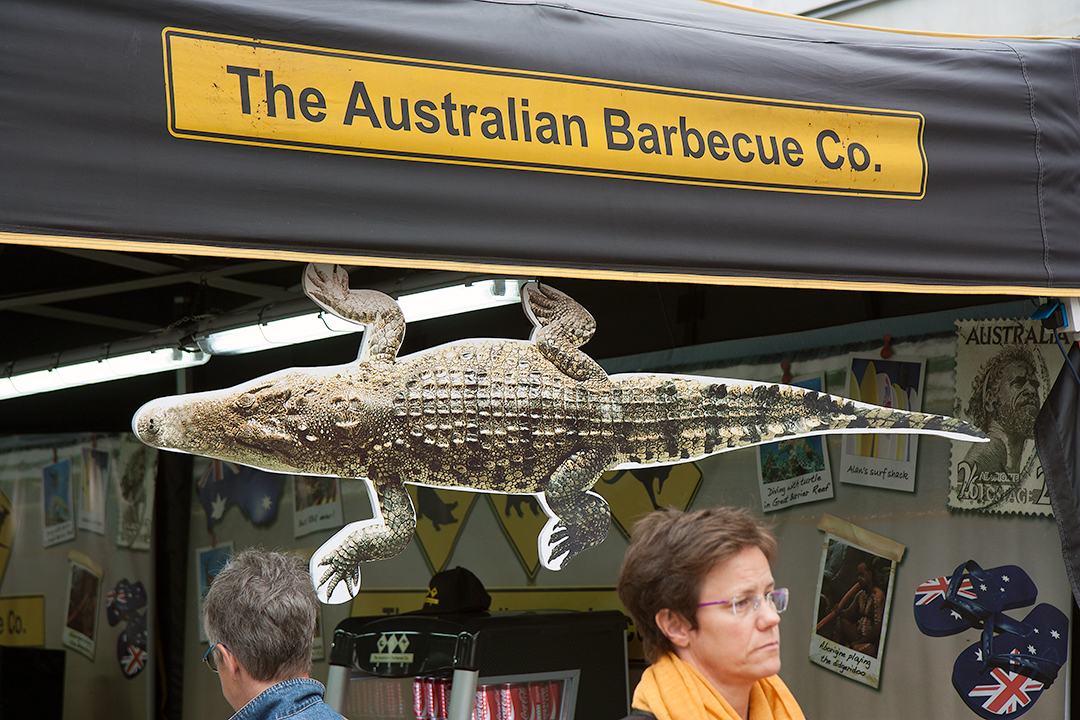 I havenâ€™t described the classes in too much detail last time so here it goes. The courses (at least the ones Iâ€™m going to) have around 15-30 people attending. This is somewhat similar to the ones at my faculty (FMF). Until now we only had one lab class and it looked like this; we went in to a room with computers (there were some people not belonging to our class in as well doing their stuff). We then continued working, from what we did at home, on our assignments. The professor was walking around and if you wanted to ask him something he was there, so basically the lab works is not another class (like in Slovenia) but more like consultation for assignments you have to do.

Majority of the classrooms have a glass wall toward the hallway. Not sure why is this, maybe because of light (there are few windows because of position and style of the rooms). Because of this I had an interesting opportunity yesterday. When I was searching for my classroom I was able to look at what other people were studying in their classrooms. This is campus so there are a lot of different types (faculties?) of studies in the same building. The most interesting was a classroom where students were massaging each other. When I first saw it I thought they had a free period or something but then I saw the teacher at the front of the class giving instructions. Maybe I should volunteer as a test subject for massages. :)

I had a lot of assignments to do till today, but somehow I managed to do them all. Iâ€™m not used to getting that much work the first week of school. I think I spent 10+ hours doing 2 assignments. Also we had a dictation exam today at Swedish course. Hopefully I did ok, despite knowing I misspelled 3 words. I just hope the rest is correct. On Monday I have a written exam.

Tomorrow is supposed to be record high temperature here, around 20 degrees. A great day for going on a boat trip.

Lastly, if you check at the upper part of the post you can see Iâ€™ve been here for exactly 4 weeks. Iâ€™ll write more about this in my next post.

Today I started my first (real) courses up here in Lulea. Besides Swedish language course Iâ€™ll be attending â€œSoftware engineeringâ€ and â€œNetwork programming and distributed applicationsâ€. In both courses weâ€™ll have group projects and seminar work. In first groups were assigned by random draw, Iâ€™m in a group with three Swedes. In second weâ€™ll be able to choose our own groups, although I donâ€™t know who I should pair up with yet.

At both courses we have an assignment due to this Friday and I have oral exam of Swedish course on Friday afternoon as well â€¦ so jupeee.

In other news, our laundry machine is broken, so I wasnâ€™t able to wash my clothes this week. I have exactly 1 shirt left, so Iâ€™ll have to figure something out by tomorrow or Iâ€™ll have to walk around naked (which I really donâ€™t want in this cold :) ).

Today I also bought tickets for a trip to some islands near Lulea for this Saturday. For the end of September I have also managed to book a longer 4 days trip to Norway. Itâ€™s really annoying how we learn about this trips. They usually post it our (exchange students up here) Facebook group at around midnight or later and itâ€™s usually limited places available, so next day you usually hear it from some people and then have to arrange everything very quickly before places are sold out.

On Friday morning we had a tour of LuleÃ¥ city (centre). Our tour guide was a person from LURC so he showed as some commodities (cheapest barberâ€™s salon etc.) along the way. After the tour we visited the city hall which is one of the highest building in the city. We were allowed to go on the roof where the view is amazing. After that, we were greeted with by few people of the city council, sadly mayor was missing because he was in Finland. They gave us some free promotional stuff and then we were off to a nice lunch, which was paid for by LuleÃ¥ (mayor). The lunch was really really good, it was a self-service in regard that you picked up as much food as you wanted and drinks were on the house as well. If I compare it with welcome dinner; it wasnâ€™t as fancy but it must have cost a fortune nonetheless (we are around 250 exchange students after all). 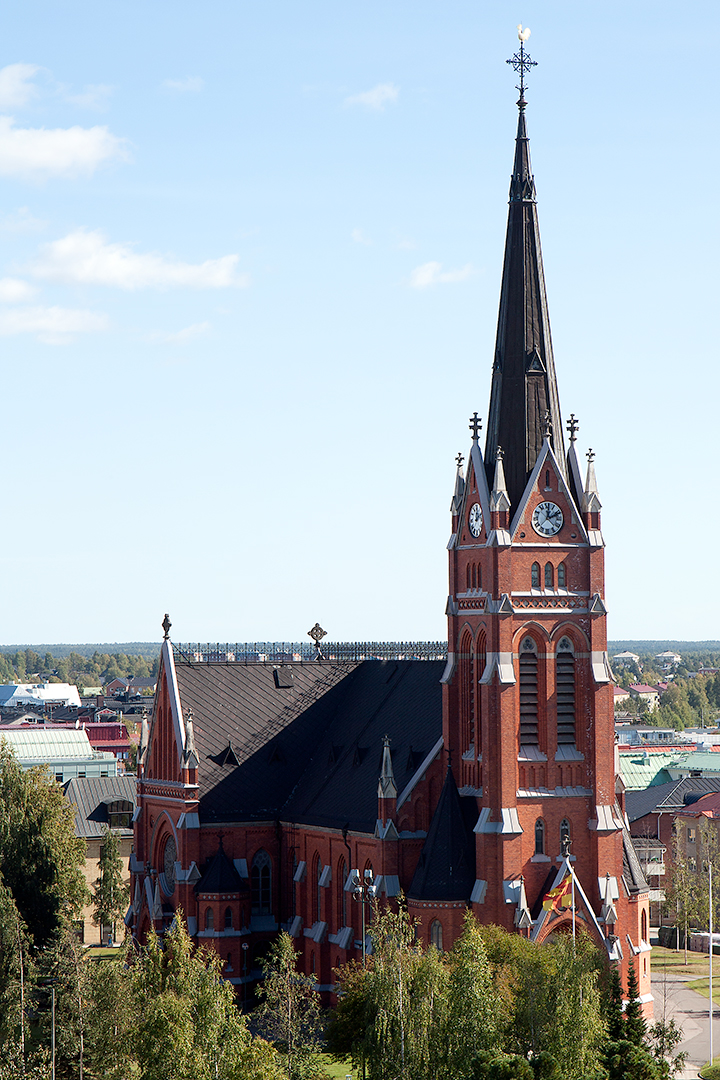 In the evening we had a â€œtetrathlonâ€ on a nearby field. We played some made up Swedish games, which were really weird. I donâ€™t know who comes up with this games but they are either weird or disgusting. 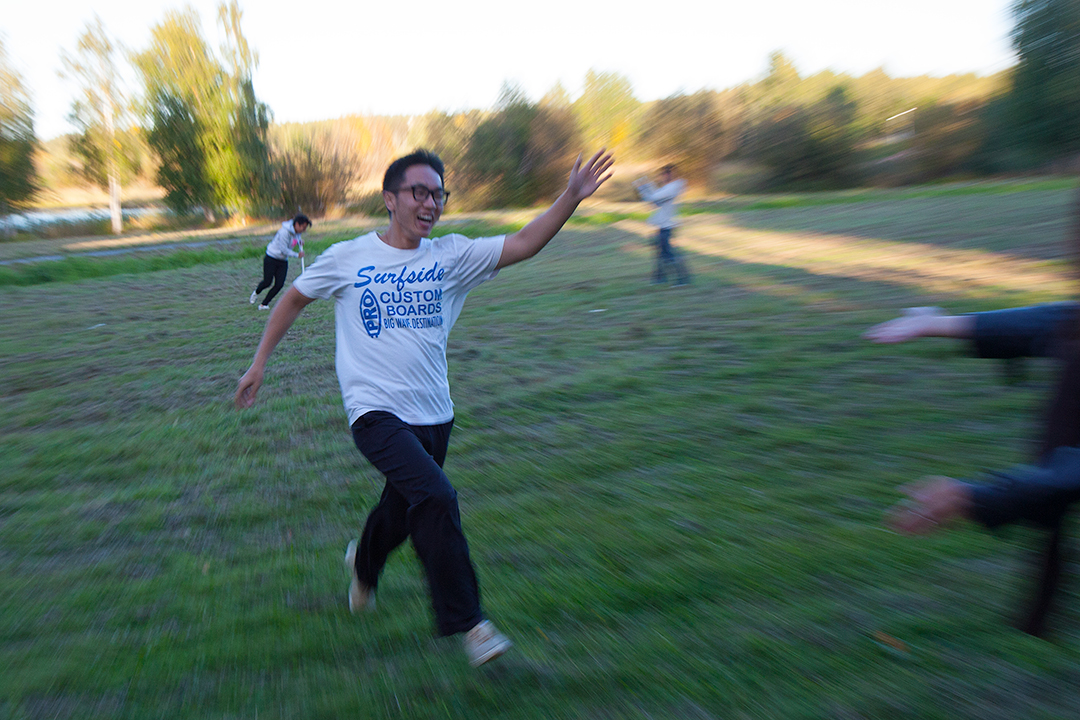 On Saturday morning we had a trip planned to rapids in Storforsen. It is an hour and ten drive with a bus. Interesting fact; we had to fasten our seatbelts on the bus, you usually donâ€™t see that in Slovenia.
The river was wide and the rapids very strong and long. We took some pictures of them and then we went to one BBQ place (which were all around the â€œparkâ€). While we were eating/chatting by the fire, some people went swimming (not in the rapids of course) but on a nearby pool of calm water. Iâ€™m not sure why they canâ€™t feel cold. 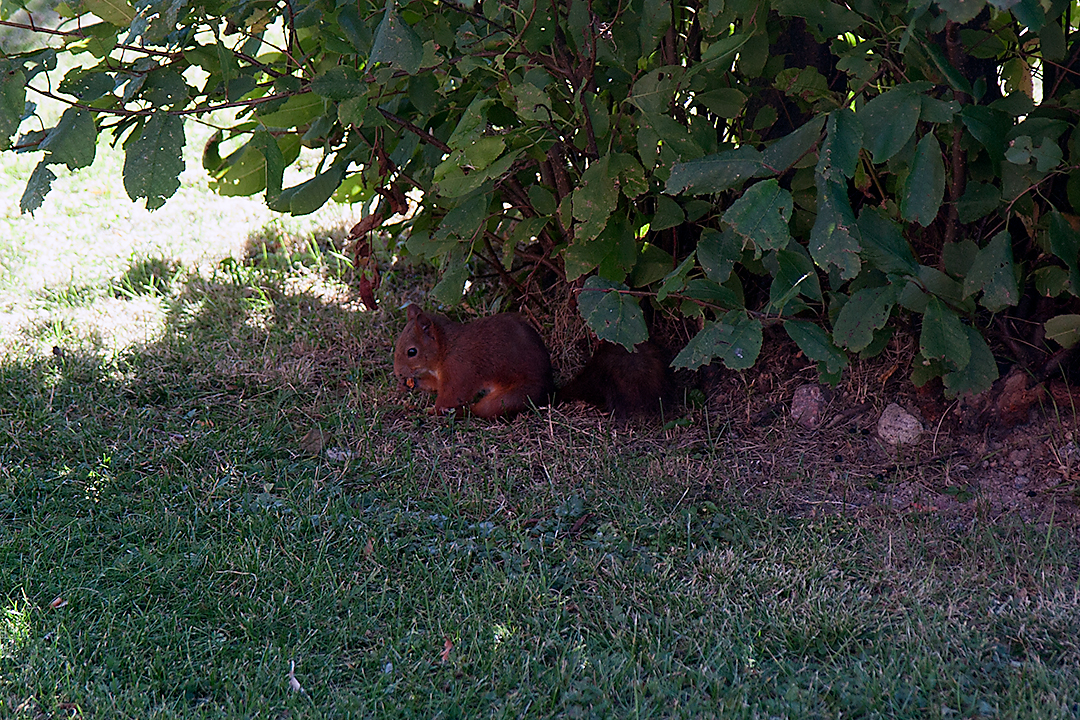 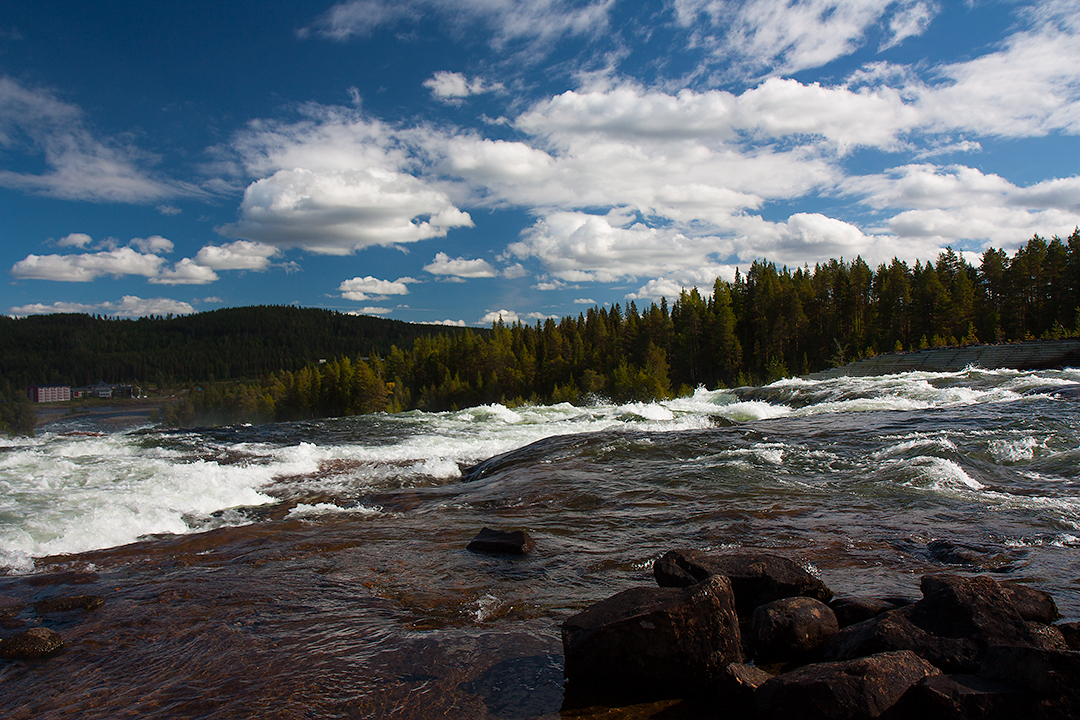 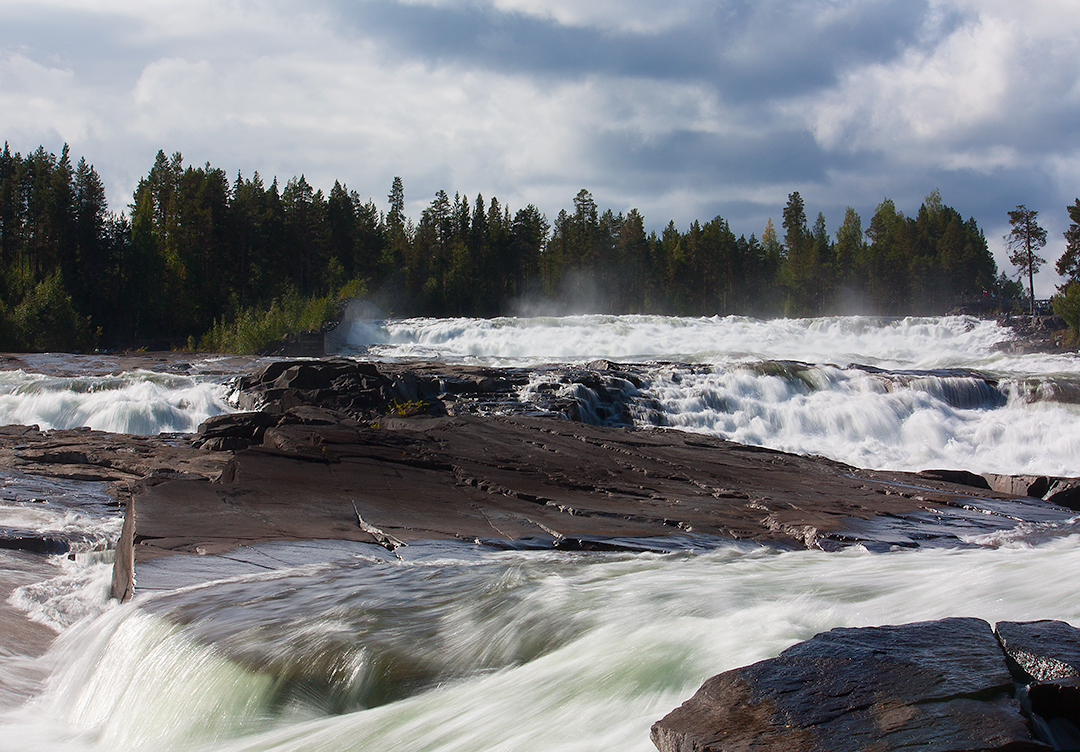 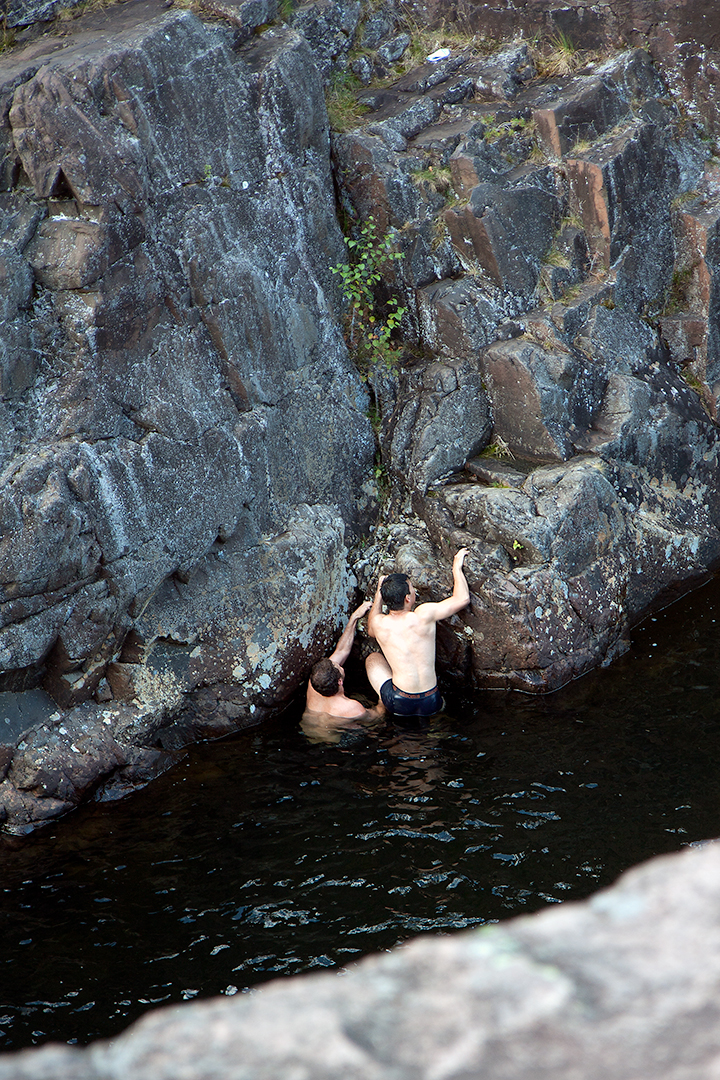 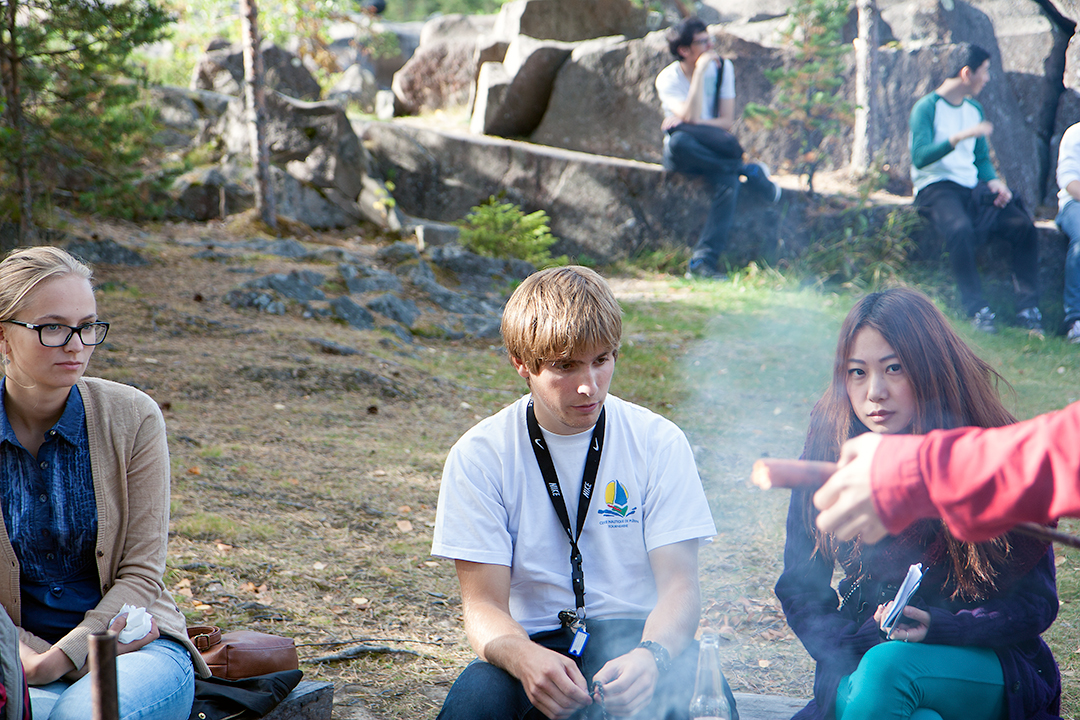 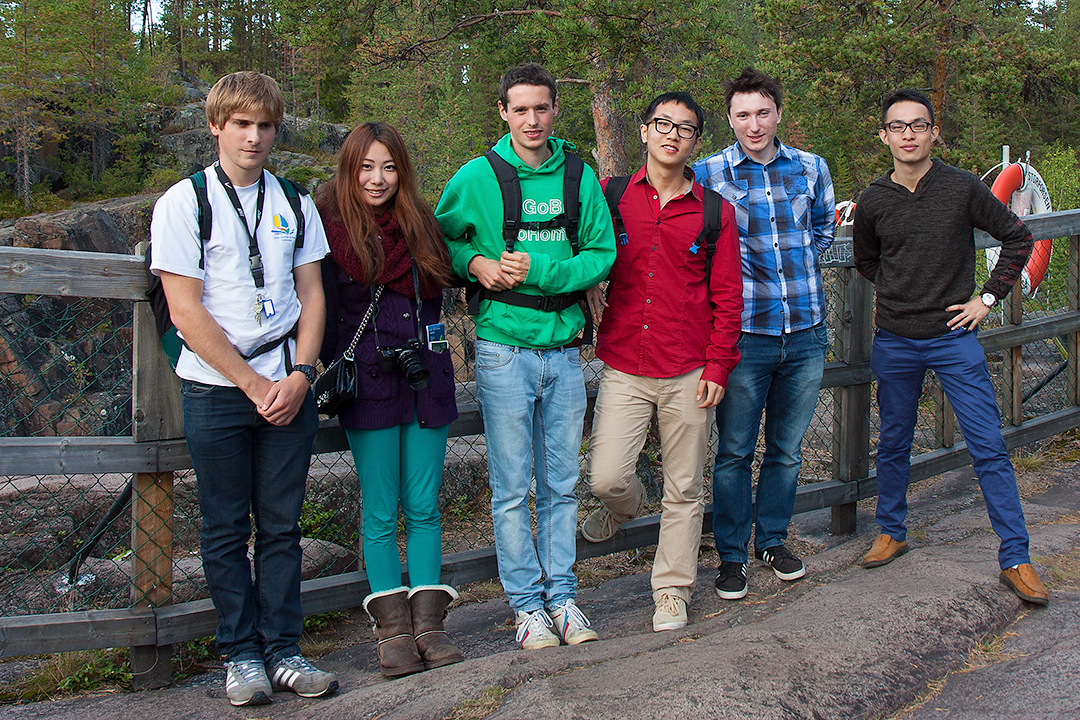 In the evening we had a welcome dinner. We had to dress as a Swedish icons so there were quite a lot Pippi LÃ¥ngstrump and hockey player. I went as a king of Sweden.

The dinner was really fancy (Iâ€™m not sure if it was prepared by university kitchen staff), there were 3 courses, appetiser, main dish and dessert. I didnâ€™t bring camera with me so youâ€™ll have to satisfy with my description of the dishes.

The food was really good, but the portions were quite small, it looked like those meals in fancy restaurants. You could probably put whole appetizer and dessert in your mouth in one big bite and main course consisted of half potato and one chicken breast.

While we were eating/waiting for next course we had some entertainment program, LURC guys had a sketch were they showed how a typical Swedish person behaves (stereotypically shy) it was really funny, later we had a male choir who sang 2 songs in Swedish and lastly a song I understood: â€œThe final countdownâ€.

It actually sounded very good. Later there was a girlsâ€™ choir as well, among the song they sang I recognized the Harry Potter theme song and a â€œHelp!â€ from beatles (if I remember correctly).

Later we had a treasure hunt which we (our table) actually won (I still donâ€™t know how), and finale from previous game nights. There were some performances from exchange students as well.

Today we only had a relaxing picnic where we hang out and chat. Tomorrow school starts. Tomorrow I only have Swedish course so Iâ€™ll have to wait until Tuesday for â€œrealâ€ school to start.

On Tuesday we started our first lessons in Swedish. There are around 25 people in the class from all nationalities, so itâ€™s really different than then language courses in Slovenia (/mother tongue). The Swedish language is a bit weird at some points as some words are written in the same way but pronounced differently based on their meaning (expl. Japan and Japanese). Other than that I think Iâ€™m managing to follow the lessons much better than French ones back in high school. The program is really intense as weâ€™ll have oral exam next Friday and written exam the Monday after. And the course is worth 3 CET, so itâ€™s about half of the normal Slovenian course taken in 2 weeks instead 2.5 months.

Lately Iâ€™ve realised that Iâ€™m not that cold anymore. Guess I have gotten used to a colder climate. In the day if the sun is shining Iâ€™m able to go outside in t-shirt. Although locals are saying that normally temperatures arenâ€™t so high at the end of August.

On Tuesday evening we had another aurora. This one was bigger/stronger and lasted much longer than the previous one. I was able to go outside to a close by bridge, which has a bit less light than surroundings of my building. I havenâ€™t talked about this yet, but the city is really well lit, even the smallest roads through outskirts of the city (forests) have lights. Anyway back to aurora, it was really beautiful, sadly this time I forgot my tripod, so no pictures, but Iâ€™m sure there will be many more to come. Here is a picture of sunset I took few hours earlier. 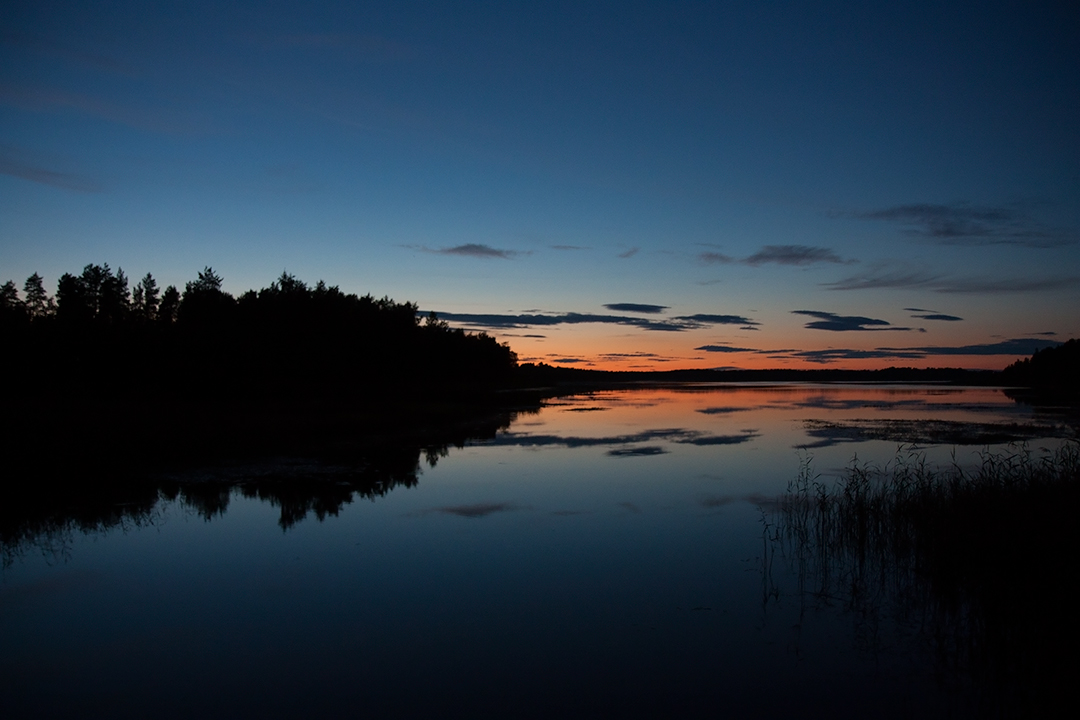 Yesterday afternoon we went to a nearby forest to pick up blueberries. We were picking them for about Â¾ of an hour and even while I ate every second one I picked, I still managed to pick about 0.5kg of them. They are really big and sweet. Maybe Iâ€™ll try to bake something with them, maybeâ€¦ 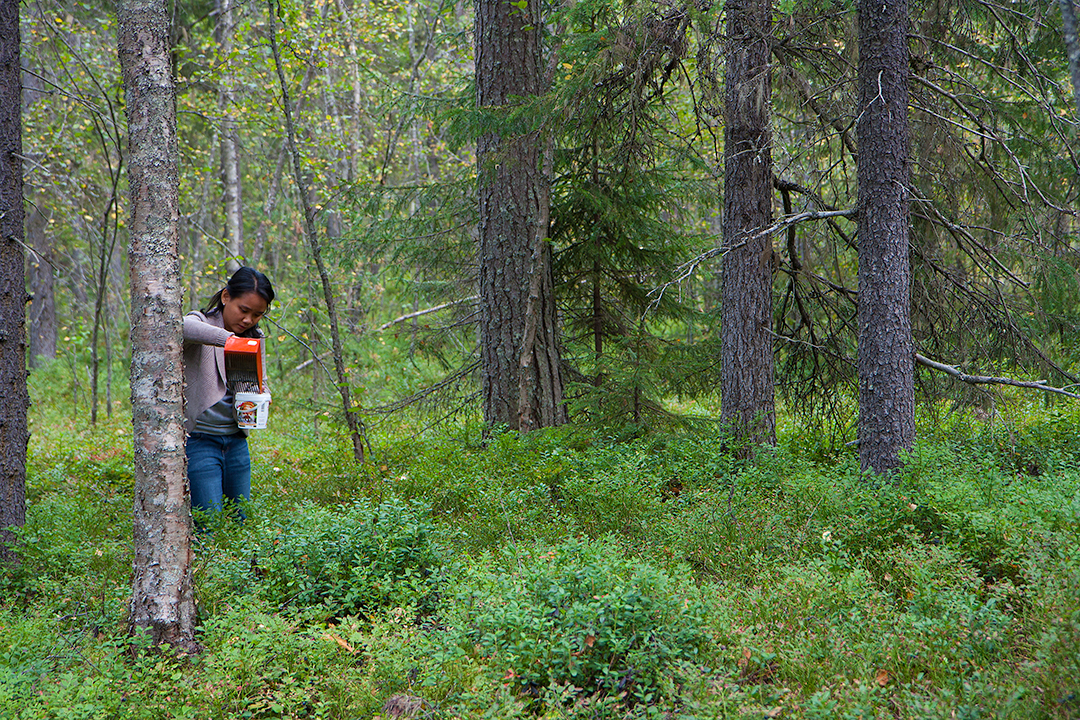 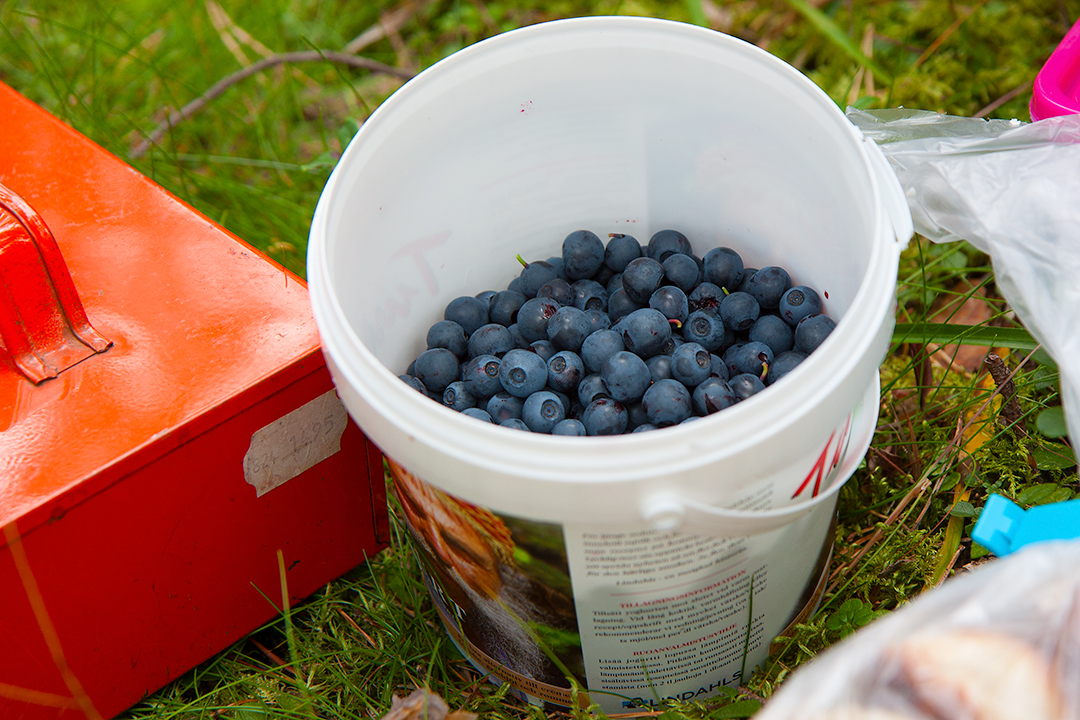 Today Iâ€™ve been working some more on the blog. Iâ€™ve managed to create and fill my expenses so far. You can see them on the right side slider. If you hover over price with your mouse, it will show approximate price in â‚¬. Although exchange rates change etc. so this is really approximation. So far expenses are quite high, although Iâ€™ve paid rent for 2 months, so I expect next month to be much less.

Today has been 3 weeks since I left Slovenia. Although I miss my folks really much, time flies here. We are busy all the time so I sure donâ€™t feel like itâ€™s been 3 weeks. Maybe one and half. If it will continue at this paste it will be time to go home really really soon.