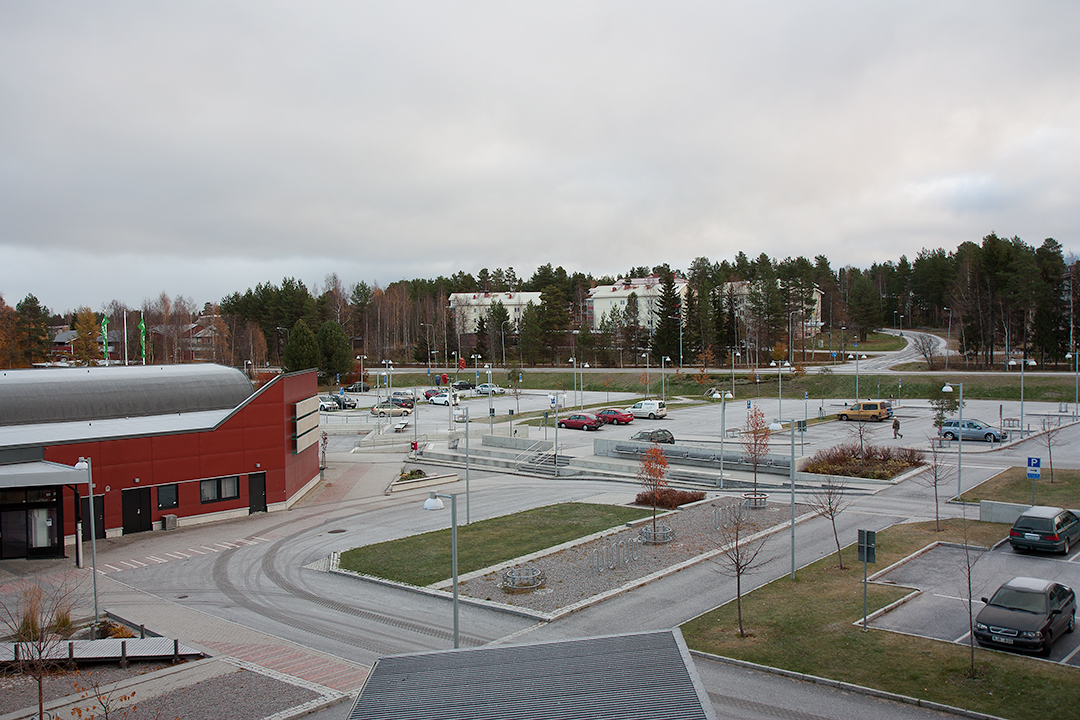 Remember the glowing eyes I posted in first post after coming back? Well that was shot just before BBQ. Here are some more pictures. (BTW: Have you guessed who they belonged to?) 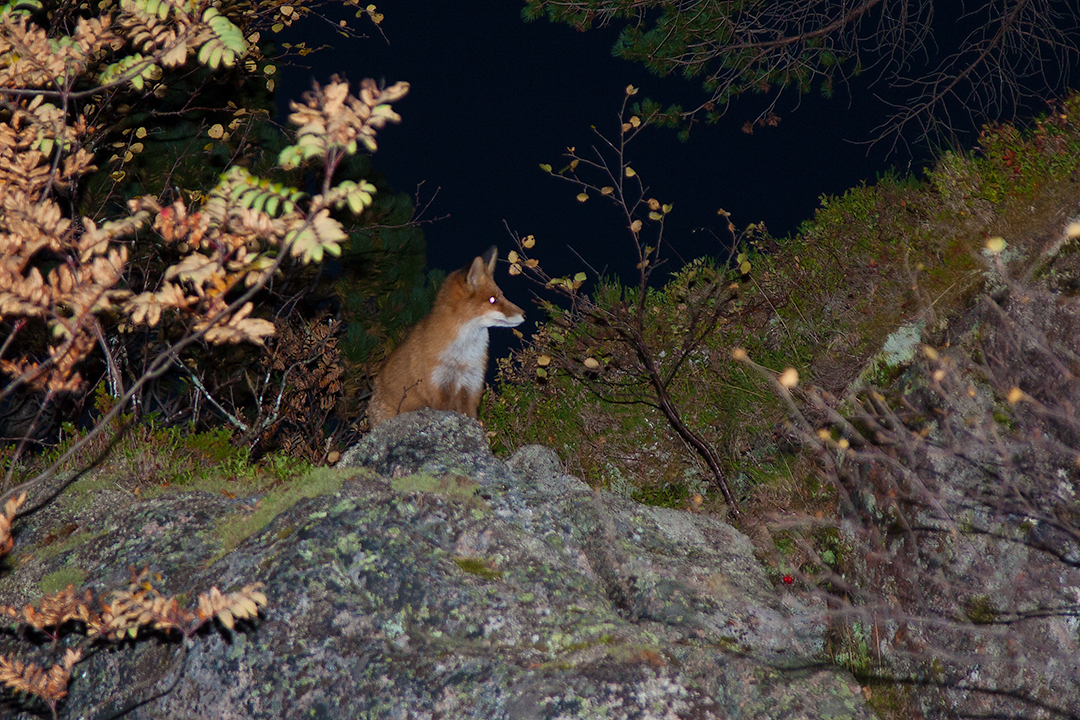 I donâ€™t remember ever seeing fox outside zoo and this one was as you can see really close. Funny thing is that it wasnâ€™t afraid of people. Sure it ran away when I tried to get closer, but never too far away that I couldnâ€™t see her. 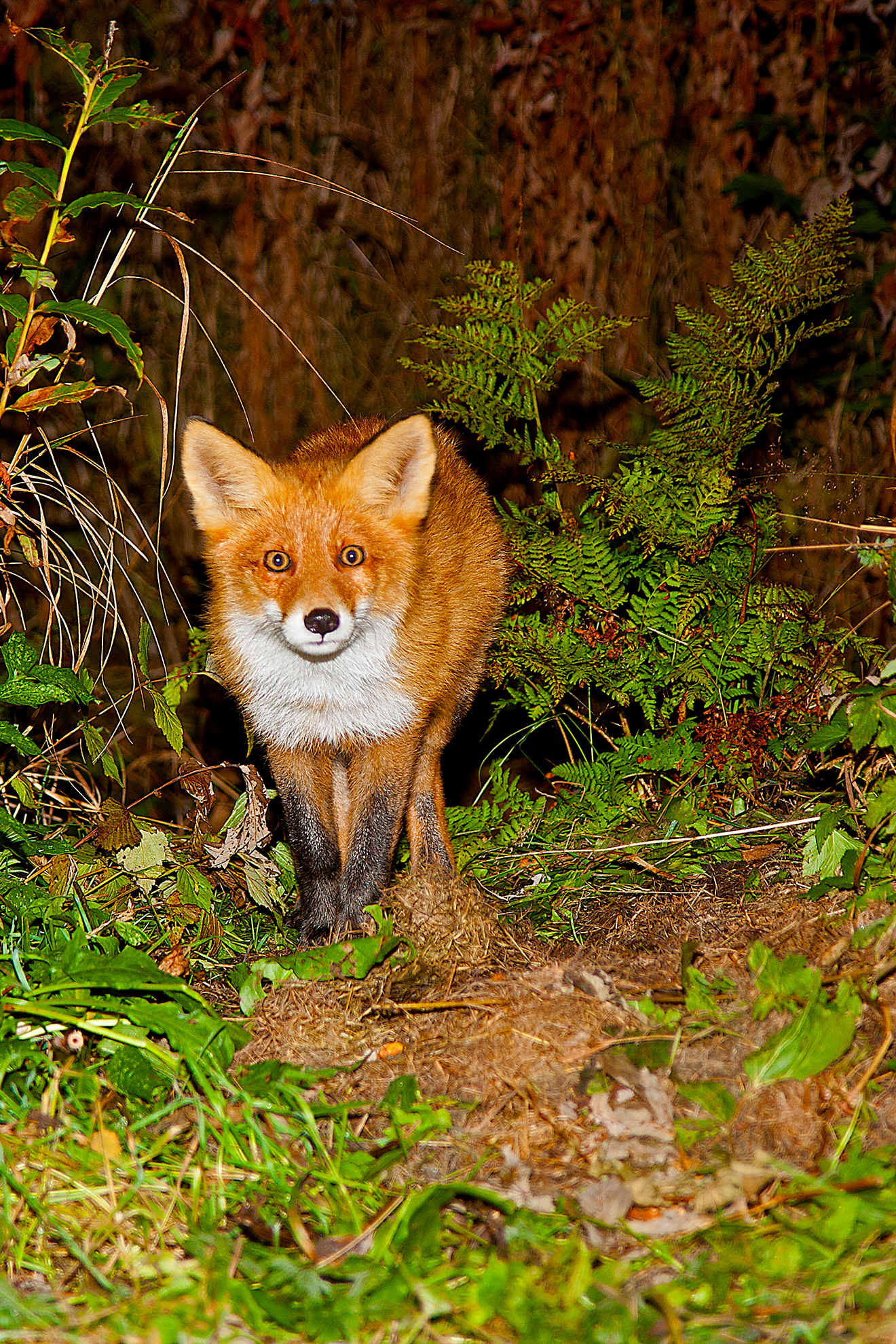 Anyway BBQ after â€œfox huntingâ€ wasnâ€™t anything special; chatting, eating â€¦ usual stuff. After BBQ around 9â€™o clock it was dark already so I decided to go a bit away from camp and take some pictures of the sky. As I said before camp was located away from the city and there was no civilization toward north to pollute air with light. I made a short hike on a nearby hill, laid down on my back and watch the stars. After few moments my eyes adapted to darkness and I could see sky covered with billions of little dots â€“ stars and galaxies. Night was cold and quiet, somewhere in the distance I could hear dog(s) haulingâ€¦ 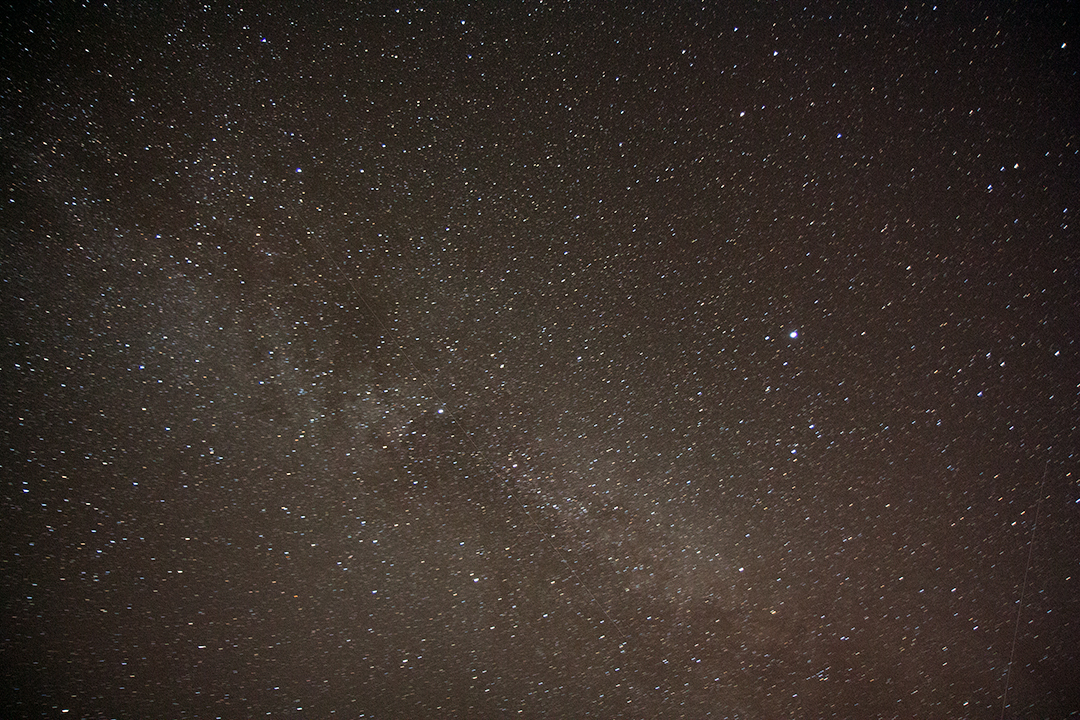 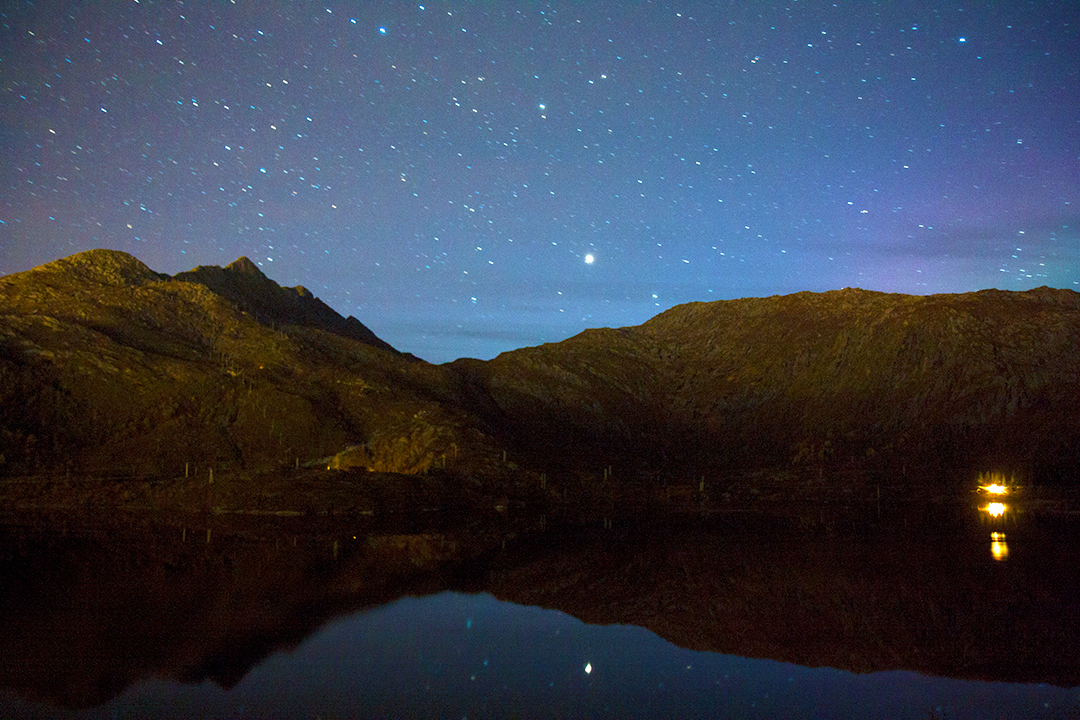 Next morning and by morning I mean 5â€™o clock, we woke up and went to the other side of the lake to admire sunrise. Despite being relatively warm during the day it looks like nights were below zero because we could see frozen ponds and frost was all over grass. Soon after we reached our destination sky turned pink and then purple, it was spectacular. Sadly we were behind a hill so we couldnâ€™t see actual sun rising up. Bad miscalculation! 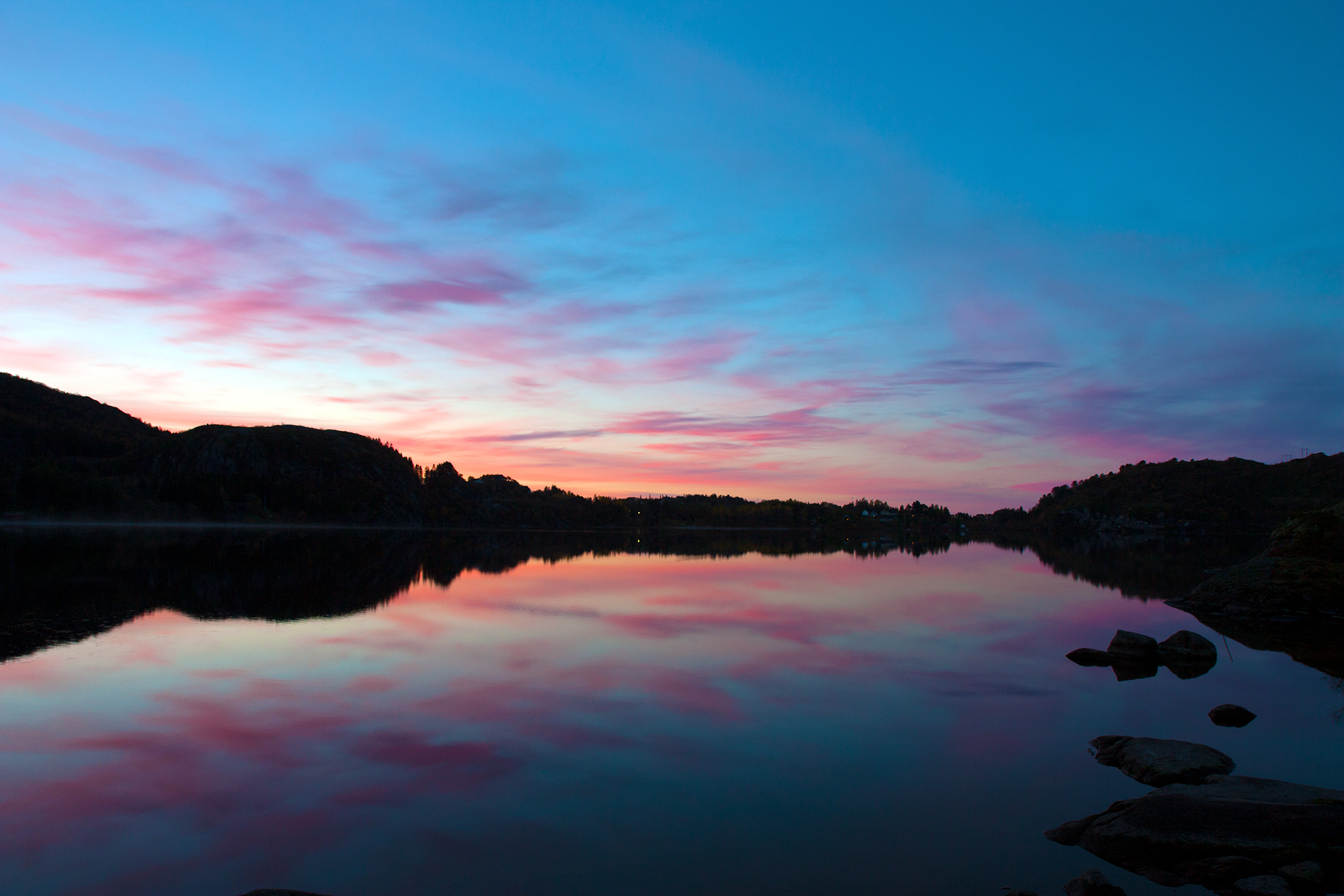 At 10â€™o clock same day we went on a bus tour of islands. Sky was getting cloudy as we departed and it began to rain after a while. We were basically driving whole day, around islands, from time to time stopping to see beach or some other point of interest (usually another beach). Once we saw the biggest Viking house in the world, but sadly we didnâ€™t stopped to look it closely, but just drove by (still donâ€™t know why all the haste). 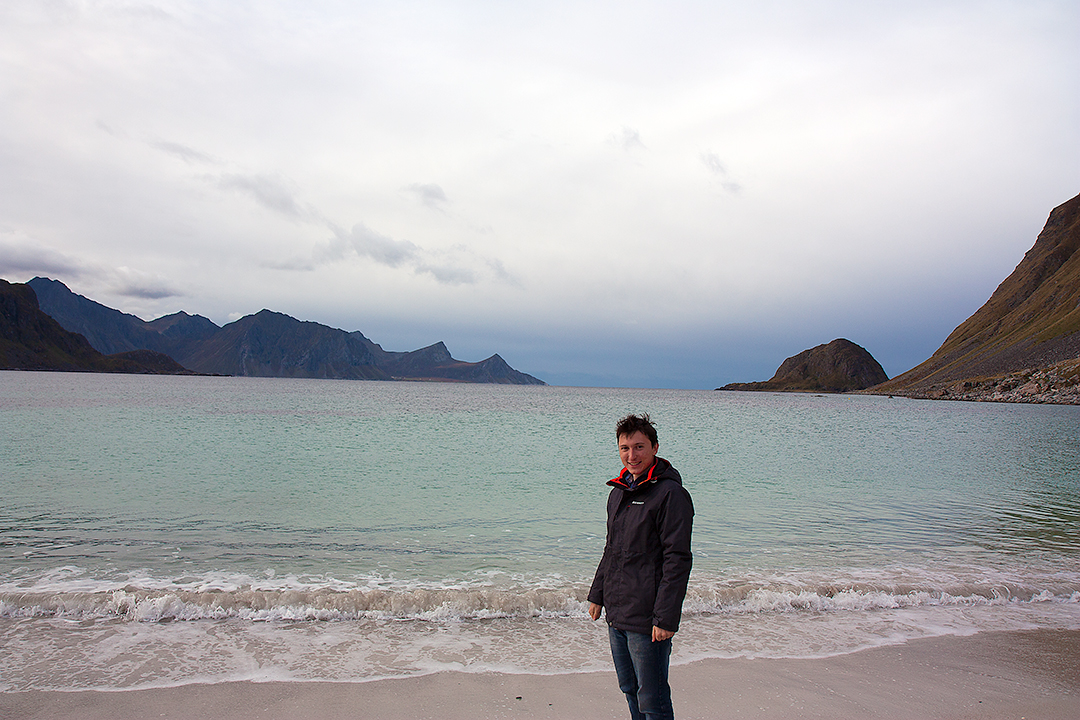 Me seeing (and touching) Atlantic ocean for the first time.


At the end we stopped in Reine where we saw some weird contraption for drying herring (or some other fish, I donâ€™t remember). There we got a chance to buy some postcards as well. Here was first time I came to realisation just how expensive Norway is. For 5 postcards with stamps I spent around 15â‚¬. 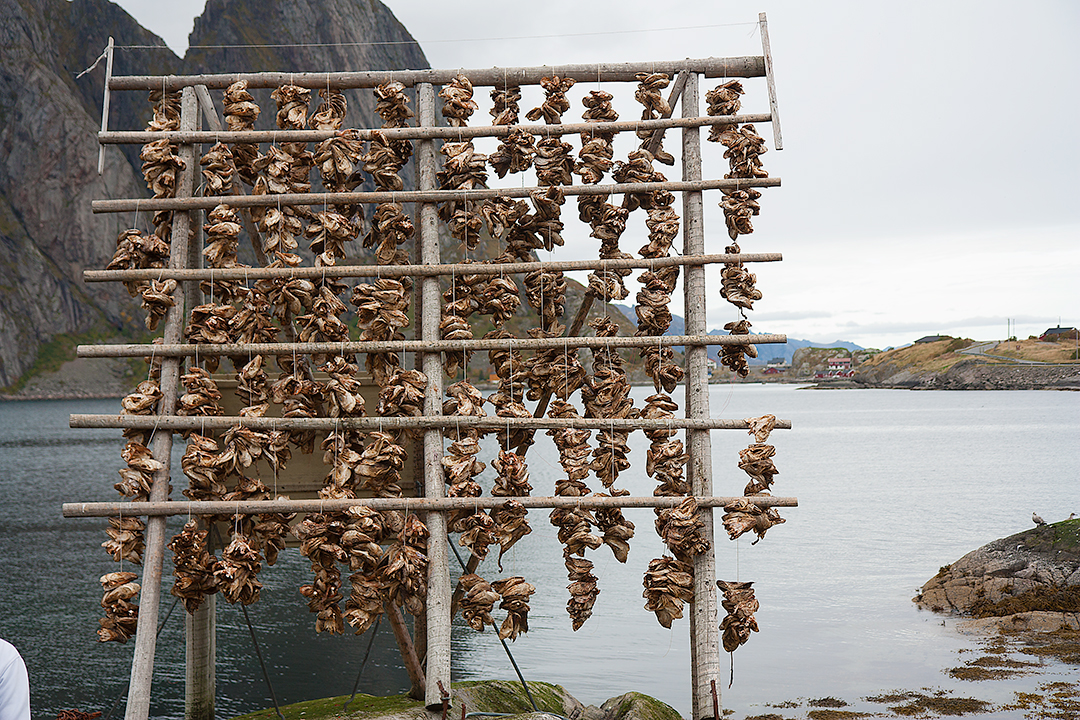 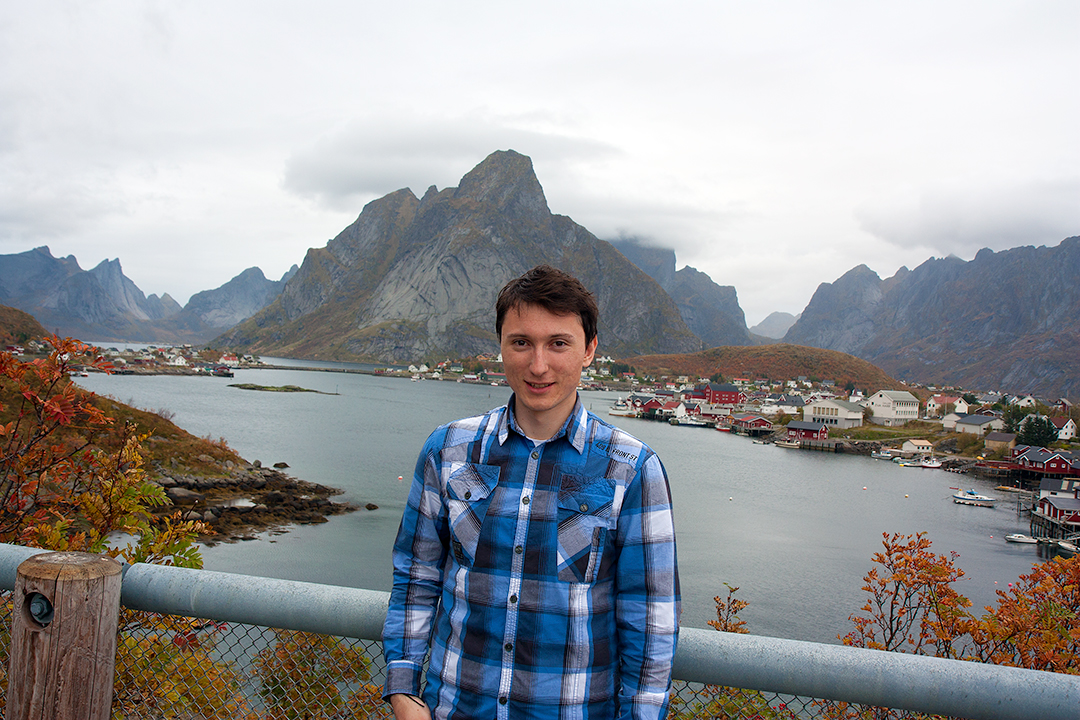 In retrospect nothing special happened on the bus trip and it would be the same if we would skip it. Luckily weather cleared toward evening (when we came back) so we were able to go on a short walk around the town. Actually it wasnâ€™t just some random walk, but we were searching for a beginning of path on a hill spanning over the town. Some people went up there in the morning and supposedly the view over sunrise was spectacular. Naturally we were planning to do the same trip next morning. After about 2h of searching we gave up and asked some random guy who then led us to the path. Again I must point out how nice the people were, he walked with us for about 10minutes to get to the beginning of path.

After that we looked for mail-box from where I could send postcards and went home. It was 9â€™o clock when we were asleep.

Today I received package from Slovenia. It was from guess whoâ€¦ Veronika. :) The package was filled with variety of (Slovenian) ingredients, sweets and other kind of food that I canâ€™t find here. I must say I was looking forward to this package for quite some time. Now when itâ€™s finally here itâ€™s half gone already. I donâ€™t remember when, if ever, I ate so much candy in such a short time. And there were some Slovenian sausages there as well, surprisingly surviving long trip up here. Today after really long time I had a Slovenian dinner (or at least dinner with ingredients I normally eat in Slovenian). Thank you again Veronika! ***

Soon after, we boarded BO-AT (Buoyancy Operated Aquatic Transport). As we were boarding they gave us â€œwet-suitsâ€, to prevent us from being cold. It was a sunny day, so I didnâ€™t felt like I needed one. Soon we departed and were traveling with much higher speed than I anticipated from a boat this size, I started to regret my decision of not taking a wet-suit as cold winds started to blew. 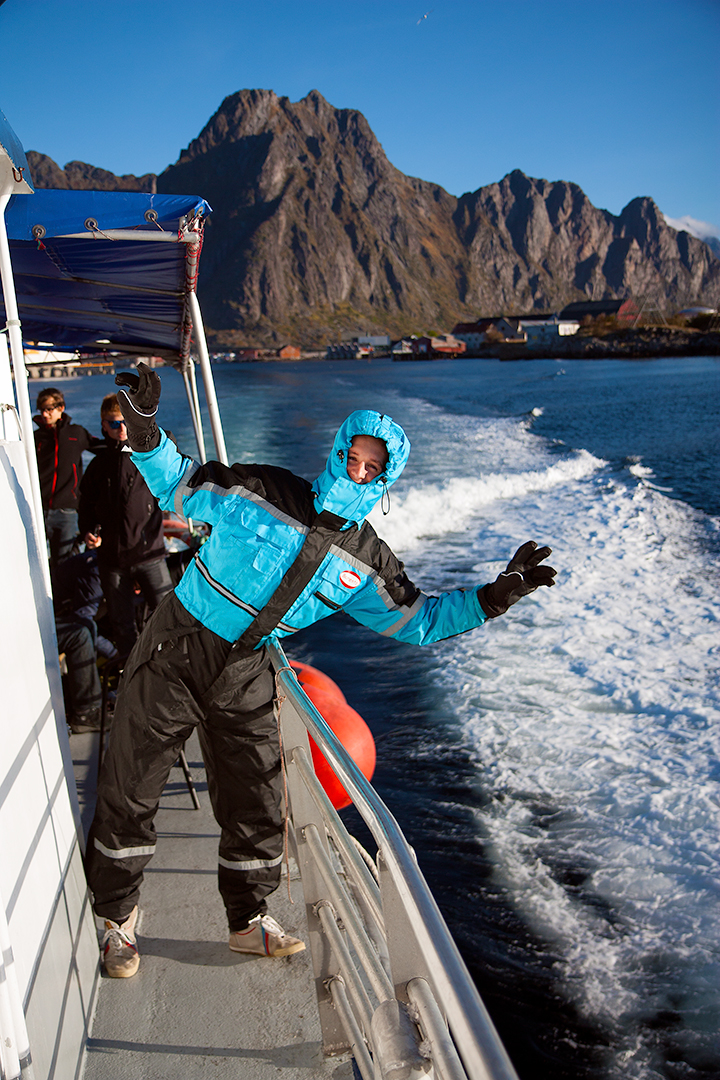 We sailed alongside beautiful landscape, full of small islands and stopped after about 20 minutes. The â€œcaptainâ€ and his â€œfirst mateâ€ gave us 5 (big) fishing rods and thought us how to fish. Soon after, to my greatest disbelieve, fishes started biting. And not some small fishes, no they were big, very big. We caught around 7 of them in about 10 minutes, then we were on our way again. 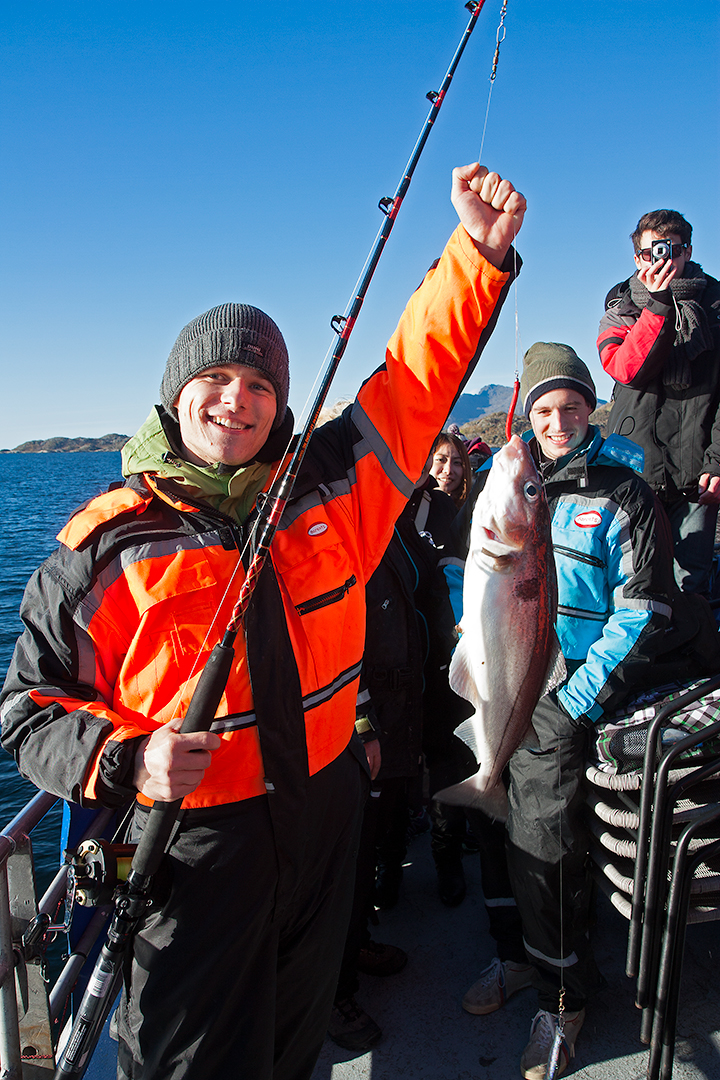 We continued between two big islands. Landscape here (all over Lofoten to be precise) was very interesting. Despite being near the sea, there were little to no trees and majority of vegetation was alpine, on higher grounds there were only grass and rocks. On the shady sides of â€œmountainsâ€ (the highest being less than 400m high) there was snow, a lot of snow. 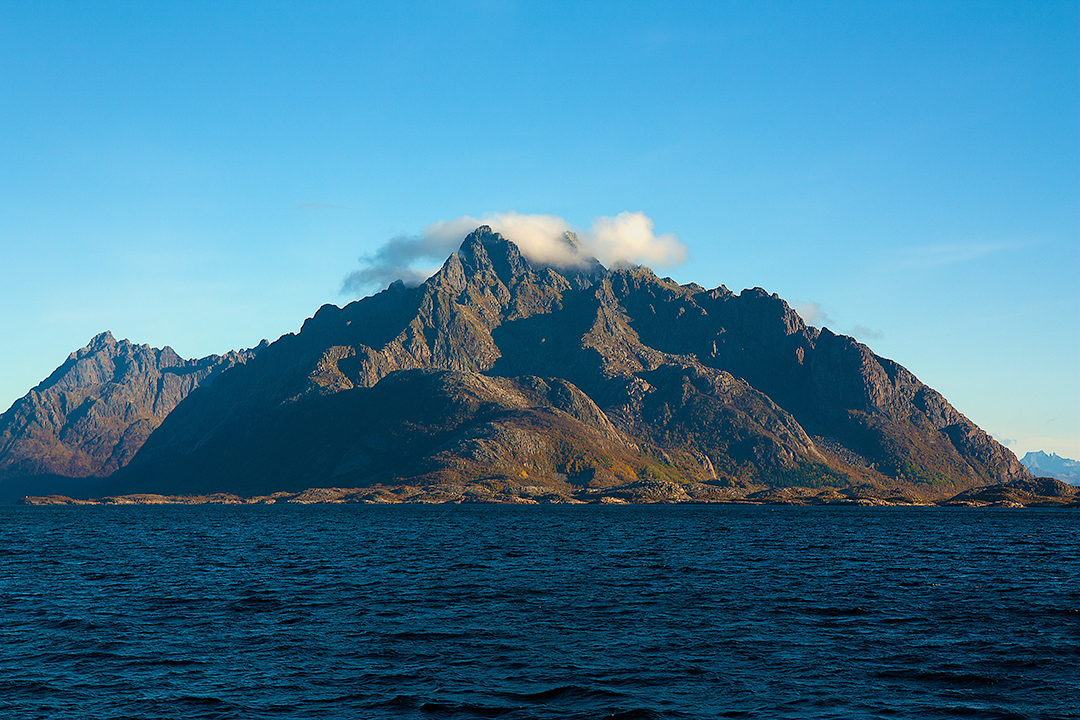 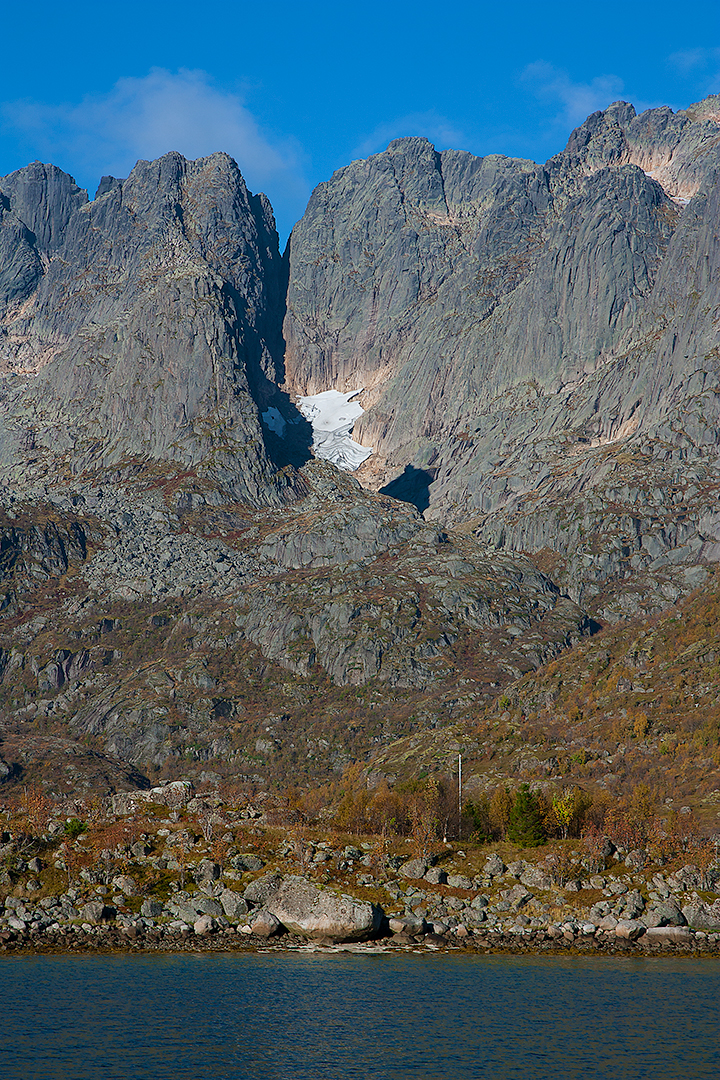 After about an hour of sailing we turned in to a small fjord. There they served us fish stew, which tasted surprisingly good (as I donâ€™t like fish that much). If nothing else it warmed us up, since we were mostly in the cold shade (fjords). 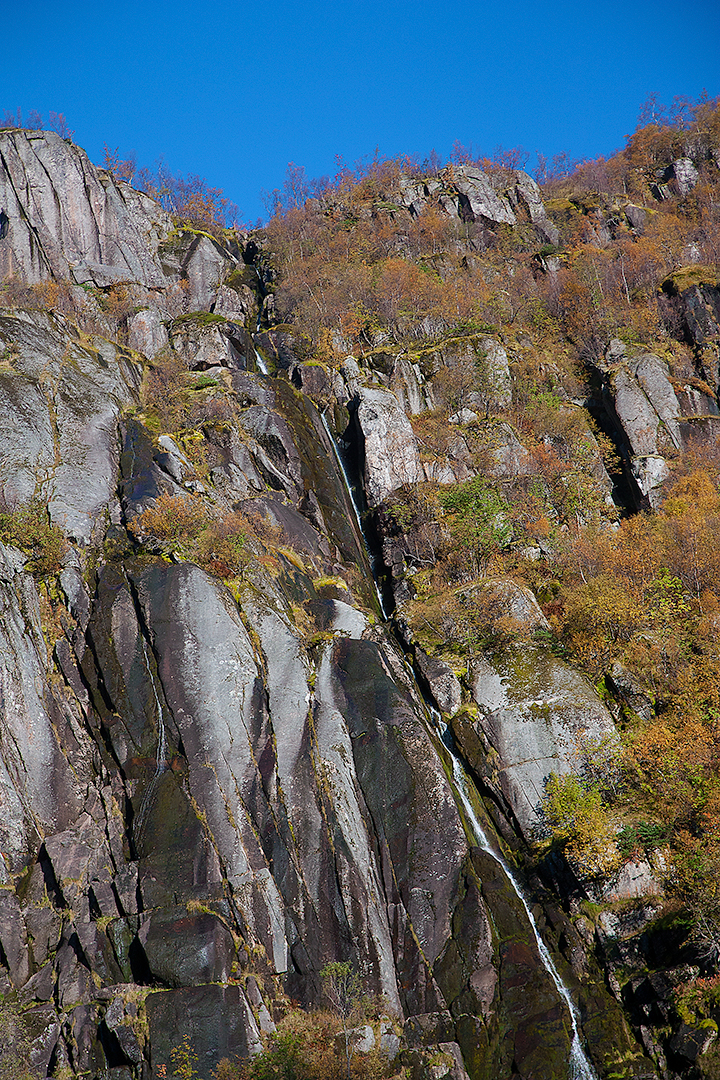 After meal we started heading back. This time we took a different route. Instead of going between islands, we went around southern one. Not long after we reached other side of the island, â€œfirst mateâ€ started throwing bread crumbs in to the water. Seagulls soon started flying closer and closer, picking bread from the water. More and more gathered and closer and closer were they coming up to the point when they started landing on people and picking bread from their hands. 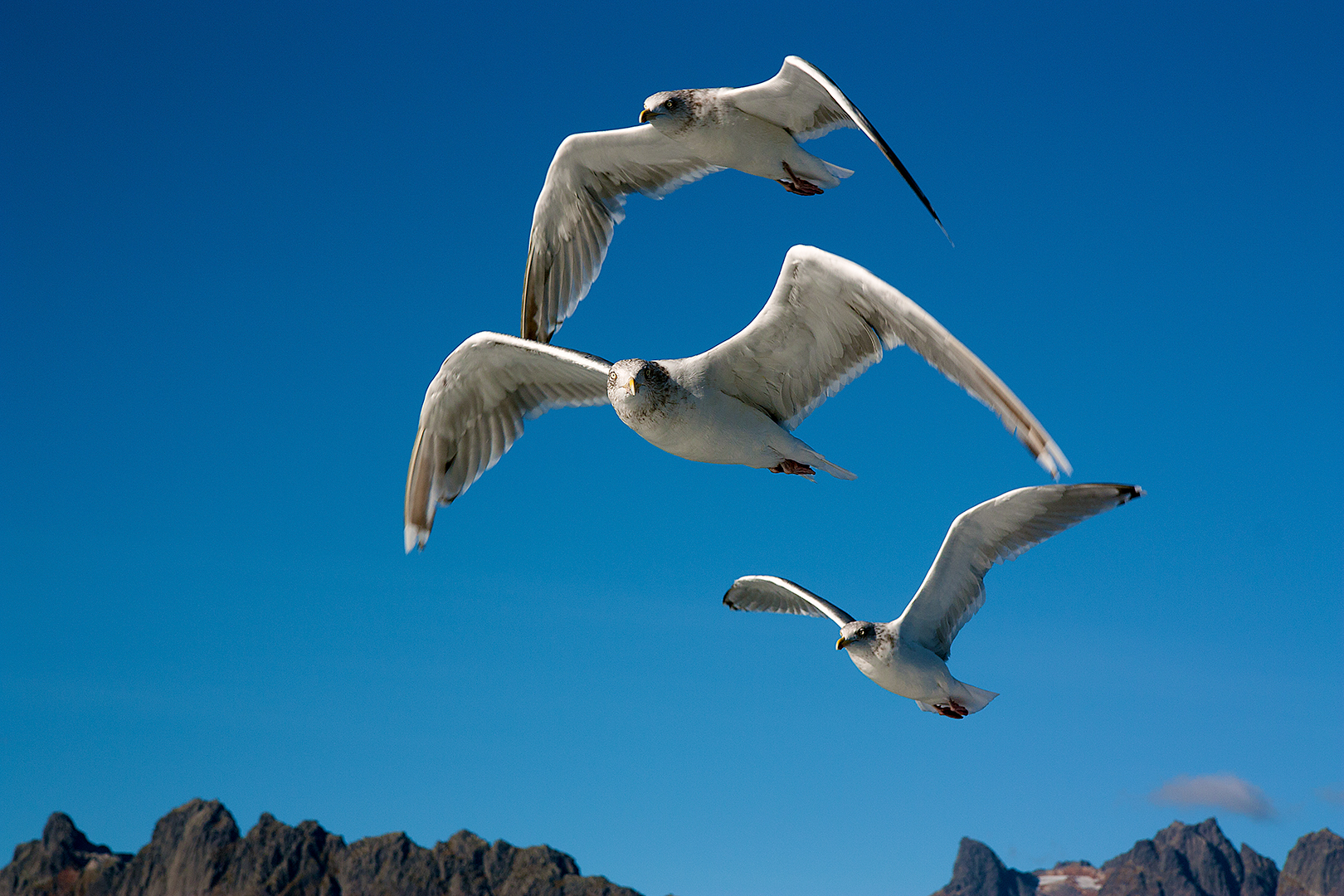 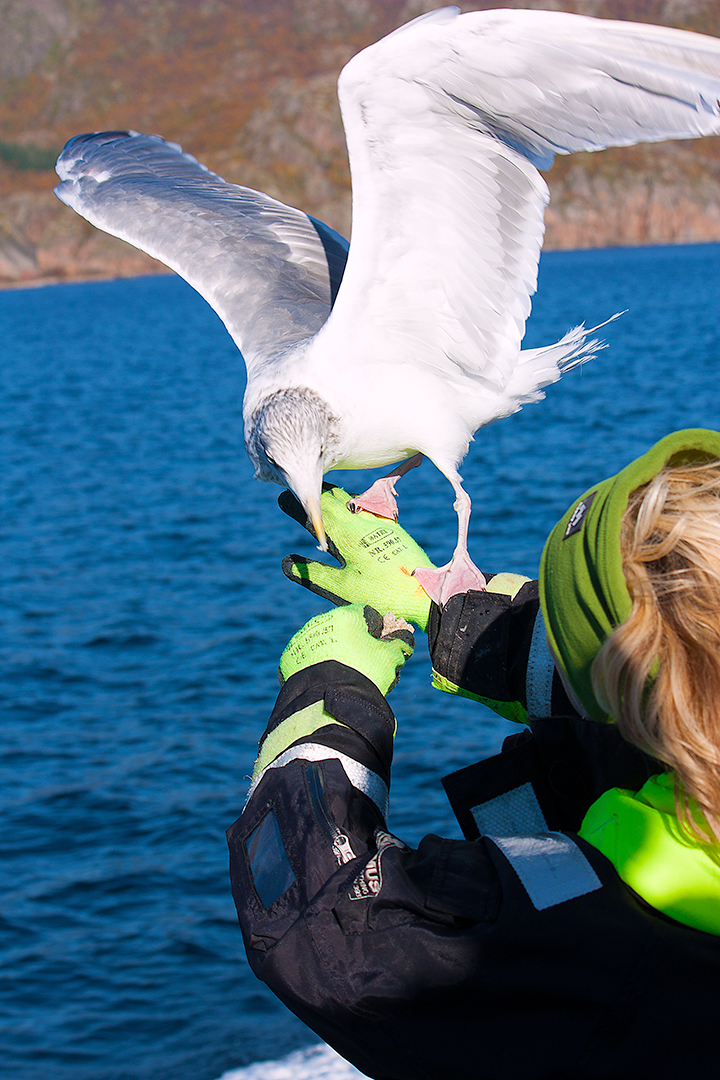 While this was spectacular to watch it wasnâ€™t the main reason we went this way. As we soon learned, big screaming flock of seagulls attracted something else, something bigger. A big shadow fell on the ground as big eagle covered the sun. :) At that point we threw some of the fishes we caught in to the water. Eagle slowly started to circle the site, descending until he plummeted in to the water, grabbing the fish. Surprisingly (?) he wasnâ€™t successful on his first run, which was good for us, as we got another chance to watch him at his attack dive. Sadly by the time he caught the fish we were just a too far for my camera lens to get a 1M$ shot. But still, I managed to get some decent pictures. 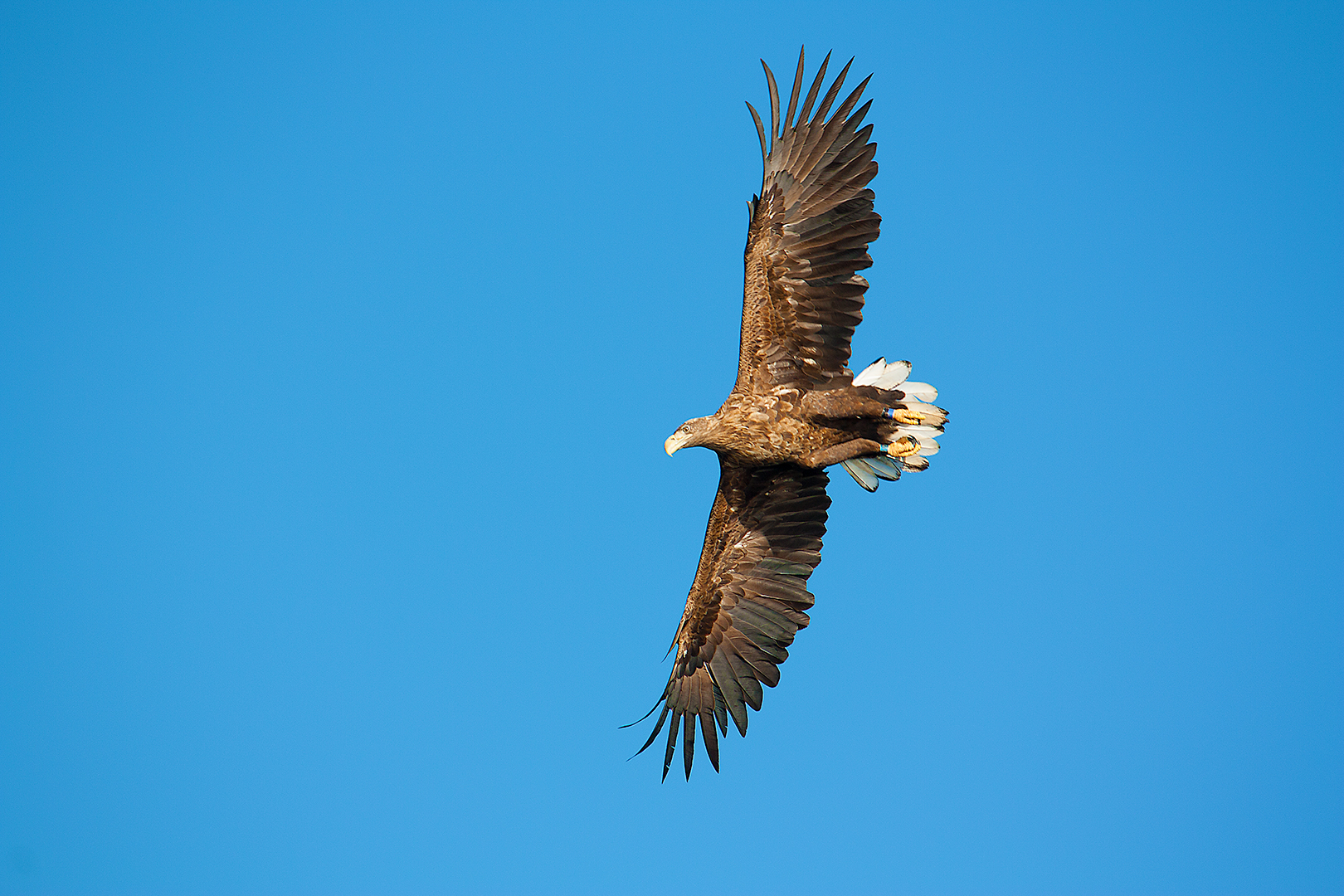 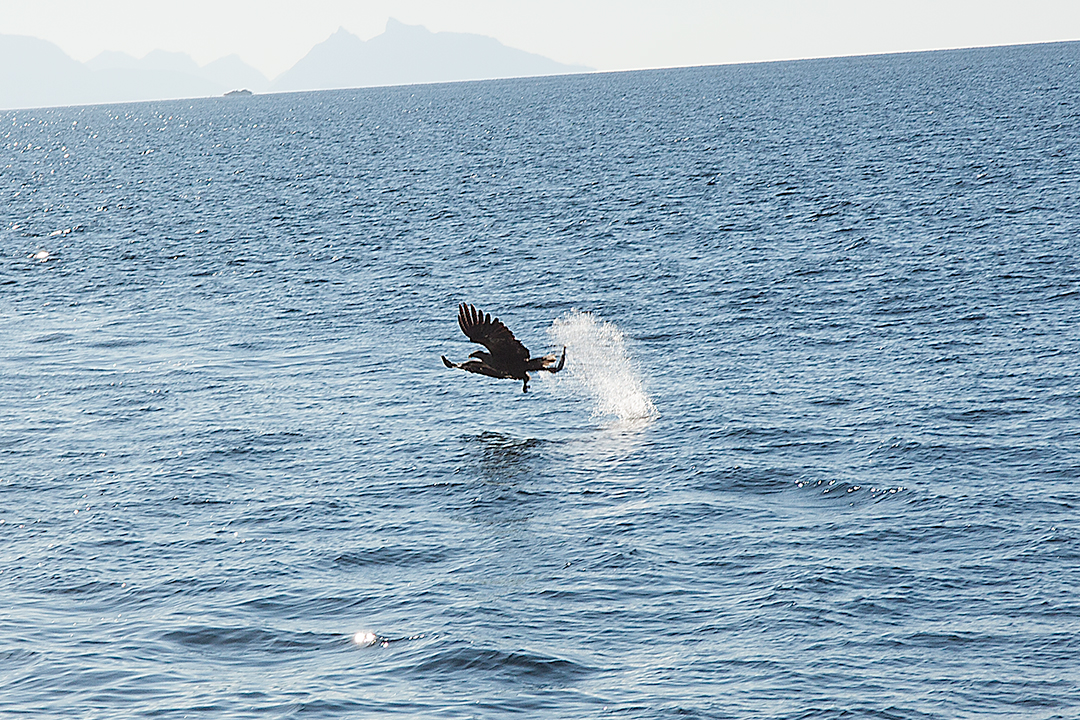 Shortly after we arrived back to the port. Whole boat trip was about 4h long and I think worth every penny. I would go again to Lofoten just because of this trip. It was really an amazing experience that you just donâ€™t get, if you travel alone.

After we came back to the camp, we decided to go canoeing. Three person were able to fit in to one canoe and as soon as we figured out how to put them in to the water, without getting wet, we were off. The lake was big, long to be exact. It took as around an hour to reach other end. There were no houses this far in to the mountains, nothing to make noise, just calm mirror-like water, trees, mountains and nothing else; surreal. 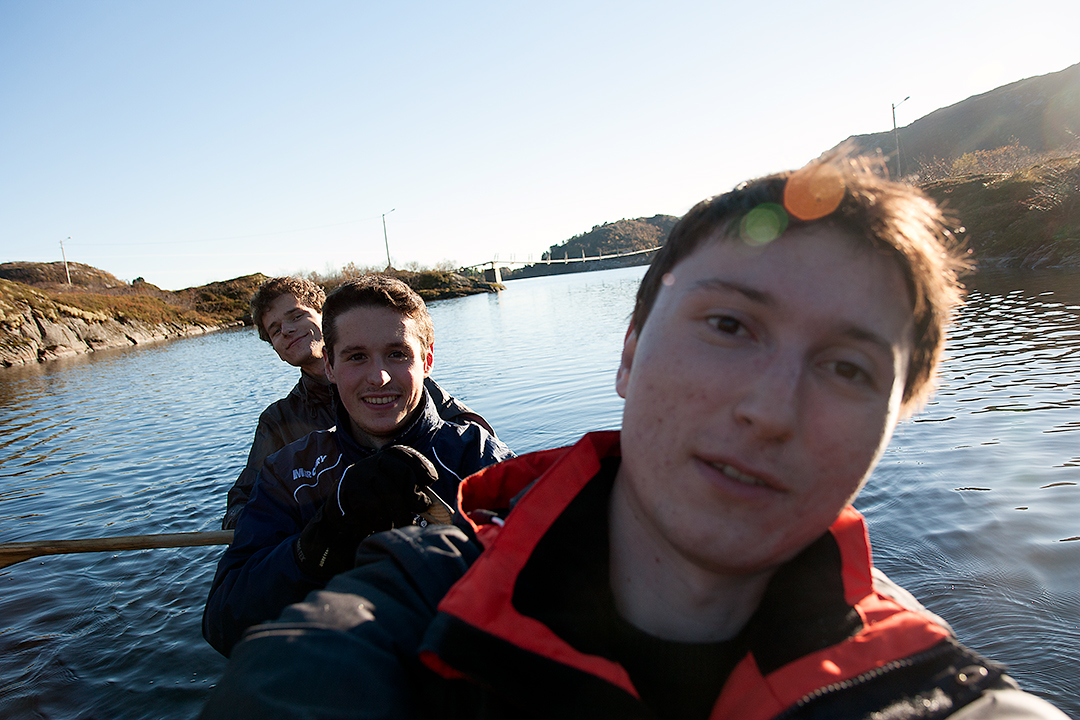 After almost 3 hours of canoeing we landed at camp and prepared for BBQ. More on this in my next post.

Login
© 2023 Jani Bizjak. All rights reserved. This material may not be reproduced, displayed, modified or distributed without the express prior written permission of the copyright holder. For permission, contact me .